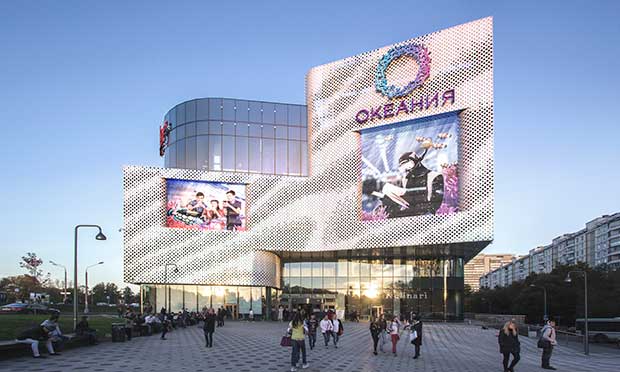 Clad in Novelis ff2® pre-painted and perforated aluminum, the dynamic and wavy facade allows for a play of light and shadow inside and outside the structure, adding to the center’s main attraction – the world’s largest cylindrical saltwater aquarium.

In addition to the center’s 24m-high, 10m-wide acrylic aquarium for which the building is named, the 137,000 m2 of the Oceania Shopping Center, which opened in October 2016, is comprised of 300 stores, supermarkets, several cafes and restaurants, as well as a cinema.

Large-scale perforated aluminum cassettes made of Novelis ff2 pre-painted aluminum give the facade a spectacular appearance. Architect Andrey Asadov’s idea behind the design of the three-dimensional perforated facade was to create a vivid play of light and shadow to make the massive complex appear lighter.

Consisting of 18,000 m2 of ff2 pre-painted aluminum, the facade has a thickness of 2 mm with a high-quality PVdF coating in “shine-pearl-white-blue.” This color provides a pearl white or bluish appearance depending on the reflection of the sunlight. 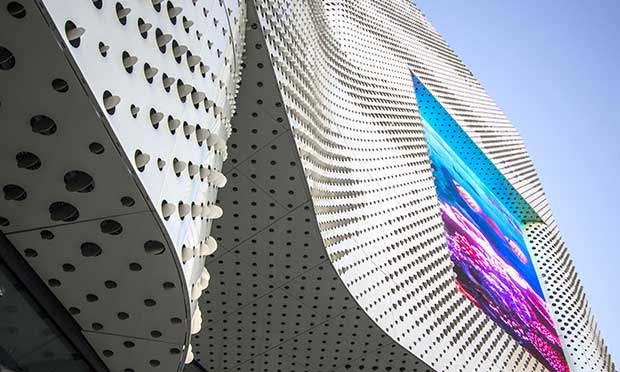 By night, the backlight of the wavy and lively pre-painted aluminum facade creates a spectacular light play which runs along the facade like a shimmering ocean. A double facade system –1.2 to 1.8 meter distance between the elements and LED lamps that change color – facilitates this effect.

The large perforated aluminum cassettes have continuously repeating round holes in a diameter of 5 cm up to 15 cm. Despite the resulting exposed edges, they offered a high degree of corrosion protection due to high-quality alloy and surface coating.

The punched round blanks remain a part of the facade by rotating them 90° in the punched recesses. This creates the visual impression of a dynamic and wavy facade structure. 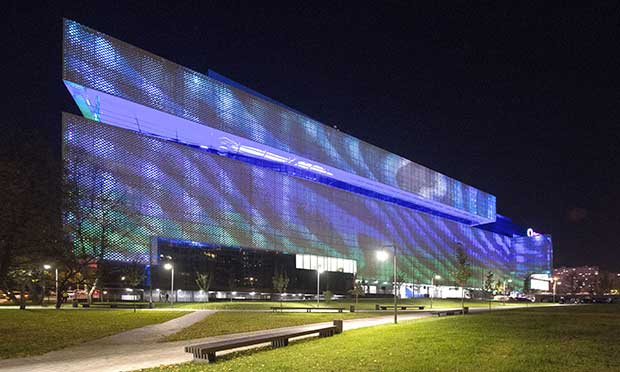 Connecting the Outside with the Inside

Asadov Architectural Studio envisioned a connection to the surrounding environment with the design of the Oceania Shopping Center facade. On the side of Victory Memorial Park, they chose a discreet and sober facade design. In contrast, on the Rublevskoe Highway – the main entrance area located in the pedestrian zone – the open glazing allows a view into the internal structure as well as the integrated LED screens within the facade to advertise commercial activities.

The bottom part of the facade in the traffic-calmed zone on Slaviansky Boulevard was clad with 60cm-high, 3m-wide unperforated aluminum cassettes arranged at an angle of 15° to each other. The resulting visual effect is reminiscent of an oversized metal fence and forms the decorative completion of the Oceania Shopping Center.

This site uses cookies to store information on your computer. Some are essential to make our site work; others help us improve the user experience.
By using this site, you consent to the placement of these cookies. Read our Privacy Policy to learn more.