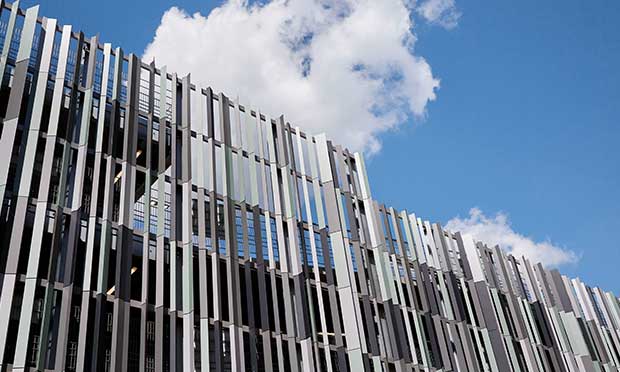 The easy processability, as well as the lacquer and surface quality – produced in an environmentally friendly coil-coating process – made Novelis ff2® pre-painted aluminum the material of choice for Herford Car Park to realize the visual embedding of this complex into the surrounding trees.

Completed in 2016, Herford Car Park was built as a split-level construction with eleven half-story floors offset against each other. It covers an area of 7,500 m2 and offers 294 additional parking spaces. A pedestrian bridge leading through a forest of trees connects the car park with the main entrance of the clinic.

Eight different geometrically shaped formed panels in four different shades of gray and green blend with the trees. With this color variation as well as the 3D-facade elements, the architects were able to accomplish their birch-like facade.

Herford Car Park was built as a reinforced concrete system construction with a decorative aluminum facade cladding in the form of a metal-pilaster strip façade. For this purpose, eight different formed panel variations made of Novelis pre-painted ff2 aluminum sheets in a 1.25 mm thickness were laid asymmetrically on the 4,000 m2 surface.

Identically formed panels were installed differently in order to create a variety of geometrical forms and patterns. The specially developed colors – Syracuse gray, Novara gray, Natal silver, Satina-green metallic – further contributed to the camouflage. The building constantly appears in new variations depending on the time of the year or day and the angle of incidence of the sunlight.

The matte surface of the aluminum panels coil-coated with NWS lacquer avoids distorting light reflections in the neighboring hospital and residential area. A further advantage is the hardness and the scratch resistance of the NWS lacquer systems. Due to the special bending of the facade elements, the visible side of the aluminum panels has the same surface coating and resistance both outside and inside the car park.

After the completion of the industrial coating process and the application of a protective foil, the aluminum panels could be directly formed so that they were ready for use. A subsequent powder-coating of the three-dimensional formed panels, as well as additional effort while handling and transporting them could be avoided. 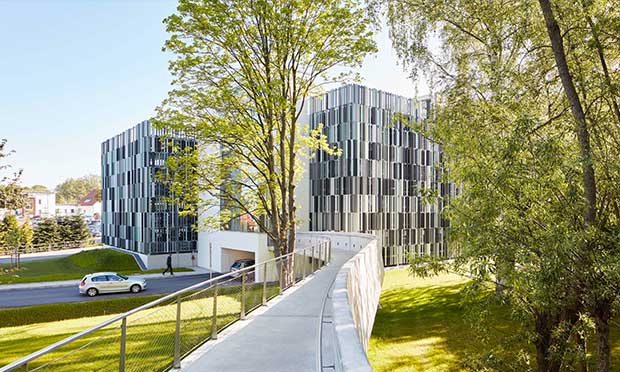 The strength and durability of Novelis aluminum cladding allowed the sheet thickness of the formed panels to be reduced from 1.75 mm to 1.25 mm. Without any negative consequences for flatness and stability, some 5,400 kg of aluminum was saved.

Besides the sustainability considerations, Novelis pre-painted aluminum is non-combustible and classified A1 according to European fire standard DIN EN 13501, making it usable on any building of any height without any restriction.

Herford Car Park also caught the attention of the Association of German Architects (BDA) and was the 2017 winner of the Good Buildings Award by the BDA from Ostwestfalen-Lippe.